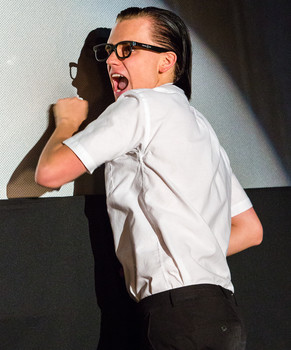 When did you first see Rocky Horror?
When I was twelve years of age. I was quite an odd child and had read a book about horror films where it was mentioned as being "The ultimate cult film, this has nothing to do with dressing in robes, talking to Jesus, and/or selling flowers on street corners." So of course I had the family rent this little film during our next trip to the local Blockbuster. Father fast-forwarded through the Frank and Brad bedroom scene. I soon came into possesion of my own copy by performing services that I would rather not touch upon here, and finally saw the film in a theater around six years ago.

When did you join the cast?
I had performed before in various locations (theaters in Houston/Katy, Comic conventions, people's living rooms, the roof of Apple Records, back alleys behind veterans' hospitals, etc) but first joined Queerios after continuous goading from my twin, who promptly performed one show with me before moving away to Sodom/Gomorrah (Denton/Dallas).

Why did you join the cast?
Seemed like a good idea at the time.

What do you do on cast?
Whatever I'm asked to. So far I've played Rocky, Brad, and Frank. But I look forward to playing some female characters in order to show just how cute I can be.

Who's sexier, Columbia or Magenta?
Magenta. Of course I wouldn't kick Columbia out of bed either . . . I'd just try to stay away from her from then on. I wouldn't have a chance with Mags anyhow.

What keeps you going to Rocky every weekend?
A hex placed upon me by a disgruntled member of the Houston cast during a night of drunken voodoo. Of course I would probably still end up coming to shows anyway, it just feels good.

How has Rocky Horror affected your life?
I developed rickets from lack of natural sunlight about three years ago, but a daily dose of Vitamin D "the sunshine vitamin" cleared that right up. Other than that I would say that it has changed the way I view people. Every time I meet someone new it's always "Oooohhhhh, you'd make a good Columbia." or something like that.

Do you have a love/love or a love/hate relationship with Rocky?
Love. I've disliked a few of the people I've met over the years, but true hatred should be reserved only for sworn enemies and family members. Besides, for the most part Rocky fans are some of the nicest people you'll ever meet.

What do you think of Shock Treatment?
I'm actually quite fond of it. I first saw it after I searched the entire Houston area for a copy and finally found one at a Circut City in The Woodlands. I now own the DVD and the original soundtrack on vinyl. I was just looking around Sundance Records in San Marcos the day before they closed and there it was, right in the middle of the Tom Waits' records, it must have been a gift from God.

What do you do when you're not at Rocky?
That's a very broad question, I live the rest of my life when I'm not at Rocky. I sleep, eat, go to school, pretend to be scottish, pretend to be having loud conversations on my phone in public just to freak out the people walking past me ("Yeah, what I'm gonna do is, I'm gonna have my testicles laminated!") I do impressions of old cartoon characters, I write a little, I can sing on good days, on bad days I scat, I spend a lot of time on the seventh floor of the library between classes, I answer or ignore my many detractors (sure, you can fuck women all the time, but suck Jack White's dick ONCE backstage at a show during high school and now all of a sudden you're gay forever), I smoke and drink, I can eat lit cigarettes for other people's amusement, I've seen C-beams glittering in the dark near the Tanhauser Gate and attack ships on fire off the shoulder of Orion, got drunk with Louie Armstrong, dueled with Tom Waits after a bottle of whiskey, got pistol whipped by Jimmy Cagney, broke up a fist fight between Roger Waters and David Gilmour, drag raced Hunter Thompson. I once entered into a drinking a drawing contest with Charles Schultz, Charles Addams, and Gary Larson just for the free beer. For enough money you can probably get me to do anything.

Are you a pirate or a ninja? (butt pirates don't count)
All ninjas can be pirates, but not all pirates can be ninjas.

Besides Rocky, what are your obsessions?
Trying to own at least one really nice suit.

What are a few of your favorite things?
Movies, all of them. Good ones, bad ones, they almost all have some redeeming quality to them.

What is your dream job?
Film director. There's plenty of other things I could do and be happy, but since they closed down the record store and the textille mill I've decided to shoot straight for the top of my desires.

What's your favorite kind of pie?
Fur. But other than that, I have been known to enjoy a slice of cherry pie and a damn fine cup of coffee. And grapefruit juice, as long as the grapefruits . . . are freshly squeezed.

Anything else random to share?
There are only two things I regret in my life, I didn't shoot Henry Clay and I didn't hang John C. Calhoun.