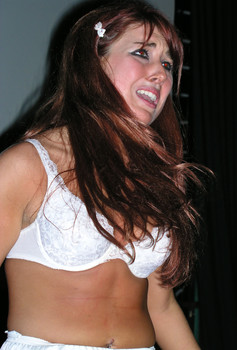 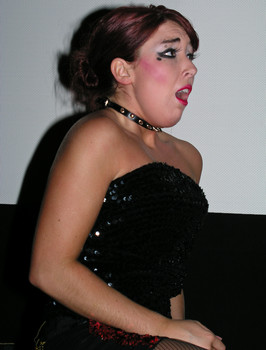 When did you first see Rocky Horror?
Halloween 1999, stuck home with strep throat.

When did you join the cast?
I originally joined the Houston Sadistic Pleasures cast in 2004, then moved to Austin and joined Queerios nine months later. After college, I moved back to Houston, did a brief stint with the Beautiful Creatures, and things just naturally dwindled from there.

Why did you join the cast?
I've always been hobby actor, and there's so much positive energy surrounding every Rocky cast. It can be damn near a natural high.

What do you do on cast?
I frequented Janet, Magenta and Columbia, and dabbled in a couple of male roles.

Who's sexier, Columbia or Magenta?
My Magenta is sexier, for sure.

What keeps you going to Rocky every weekend?
Erm.. I'm an absent friend :(

How has Rocky Horror affected your life?
It was really a positive thing for me in my first semester of college. I didn't really know anyone in Austin, and it was really great for meeting new people and boosting my confidence as a little fish in a big pond.

Do you have a love/love or a love/hate relationship with Rocky?
Love/love with the film, love/hate with the drama involved in being a cast member... and that's with every cast I've been with.

What do you think of Shock Treatment?
Camptastic.

What do you do when you're not at Rocky?
I'm a Marketing Manager for a software company.

Are you a pirate or a ninja? (butt pirates don't count)
Butt ninja.

Besides Rocky, what are your obsessions?
I'm not really an obsessive person, but I can get pretty riled up about fried chicken.

What are a few of your favorite things?
My job, my hubby, my dog, my house, friends, Big Brother, chicken, bubble bath, coffee...

What is your dream job?
If I were getting paid a little better and our product was a little more advanced, my current one would be pretty amazing. I love what I do.

Anything else random to share?
Miss you guys! I'm sorry I sorta fell off the face of the earth there. Thanks for thinking of me and inviting me to the Absent Friends area!