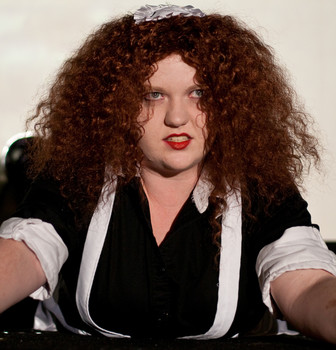 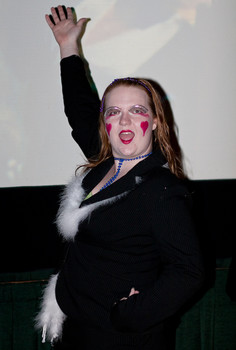 When did you first see Rocky Horror?
I can't remember when I frst saw the movie... It was halloween and I was very small is all I know. The first time I saw it with a live cast was Sept 2001. It was Los Bastardos back when they were at the Forum in Arlington. I met my soon-to-be ex-boyfriend at that show (it was the drag show) and ws unoficially on cast for a few months, then I oficially joined cast right after LB lost that theater.

When did you join the cast?
I first saw Queerios on St. Patrick's day 2007, and Joined cast that night.

Why did you join the cast?
I was genuinely impressed with the show. When I left LB to move to the west coast I intended on joining another cast as soon as I got there, but all of the other cities' casts that I have seen sucked in comparison, and then I saw Queerios and they were fucking awesome.

What do you do on cast?
Well, I am Training Director, Techie, and I play Transie and Magenta right now. Hopefully I will play some more things soon.

What keeps you going to Rocky every weekend?
Addiction?

How has Rocky Horror affected your life?
Well, It keeps me out of trouble (for the most part), and it helps get me out of my shell. The first two months I was on this cast, I think I spoke a total of three sentences, and now people can't get me to shut-up. ;)

Do you have a love/love or a love/hate relationship with Rocky?
LOVE/LOVE!!

What do you think of Shock Treatment?
I am almost embarrassed to say this, but I have never seen it.

What do you do when you're not at Rocky?
Sleep, work, play wwith my cat, hang out with my roomates, hang out with friends. Pretty much in that order.

Are you a pirate or a ninja? (butt pirates don't count)
I am definitely a pirate.

Besides Rocky, what are your obsessions?
My cat, jigsaw puzzles, Love & Rockets, movies.

What are a few of your favorite things?
Strawberries, white chocolate, art.

What is your dream job?
Being able to subsist on painting.

What's your favorite kind of pie?
Does Cheesecake count as pie? If so, white chocolate cheesecake with strawberries on top.