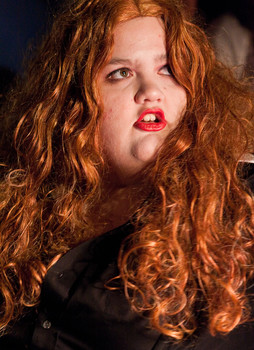 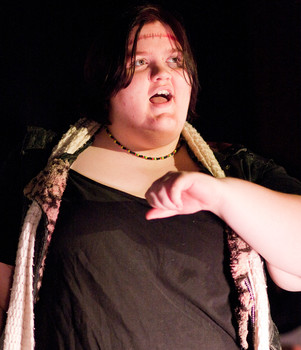 When did you first see Rocky Horror?
On screen all the way through: early 6th grade. I saw it in a theater with a shadow cast freshman year of college.

When did you join the cast?
November 2010

What do you do on cast?
Play Magenta, Crim, Eddie, Brad and Dr. Scott as well as all the tech positions as I'm needed to do them. Also, previously a tech director.

What keeps you going to Rocky every weekend?
I spend my day pretending to be normal. My nice little photos of my cats and my niece and nephew stuffed neatly in my wallet, pristine, belying some manner of white-picket fence innocence. Then, on Saturday night, I get to blow off all that steam by running around in fishnets.

How has Rocky Horror affected your life?
It's given me a healthier body image. "Hey, I CAN walk around in a corset, and look hot doing it." Bamblam

Do you have a love/love or a love/hate relationship with Rocky?
Love/despise

What do you think of Shock Treatment?
I had to stop 20 minutes in and watch Teenage Mutant Ninja Turtles just to maintain what semblance of sanity I had left.

What do you do when you're not at Rocky?
camping, nature stuff, video games, arty stuff, writing, reading, Dungeons and Dragons, and cat herding

Are you a pirate or a ninja? (butt pirates don't count)
Ninja, for I am silent and unassuming.

Besides Rocky, what are your obsessions?
retro video games, Alice Cooper, classical/ancient mythology and its pertinence to modern literature, and Vikings

What are a few of your favorite things?
see above

What is your dream job?
writing stuff...haven't figured it out past that. Award winning novelist would, of course, be ideal.

Anything else random to share?
One of my cats was nominated for an officer position on cast...and he almost got it.