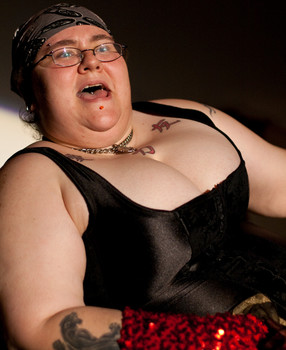 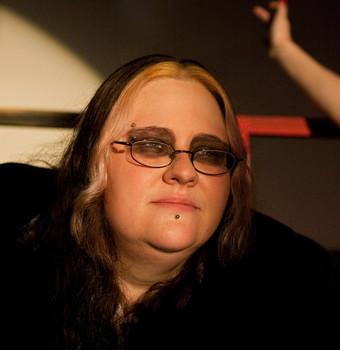 When did you first see Rocky Horror?
The first time I ever saw Rocky was with my older brother Stu after he rented it from the video store. I was completely captivated by it, and I then forced everyone I knew to watch it with me.

Why did you join the cast?
Raini jumped into the booth with my brother, my friend Kate, and me at Denny's one night after a Rocky show. We were just there having a late night snack, and she totally convinced us that Rocky live in Austin was the best thing ever. We talked for a long time and I told her I had seen the show in Illinois, and she pretty much demanded we come the following week. We then decided that she was awesome, and had to come with us to see Hair at Zack Scott. So, we showed up the next weekend at the show and I have been on cast ever since. Raini went to Hair with us (Schlotzsky's). Rocky = Great Friends/Times

What do you do on cast?
Hello, my name is Boobi I am the Tech Goddess. During my time at Rocky I took care of anything and almost everything having to do with Tech. Including but not limited too: Spot, Floor Lights, Tech List, Recruits, Box, Coffin, Costumes, Techies, Set/Take Down, etc. When I am not on tech (does this really happen) I like to play Magenta, Riff, Frank, and sometimes Brad.

Who's sexier, Columbia or Magenta?
Magenta!!! That is hands down, no question. Pat Quinn is a total Goddess, and one of the greatest people I have had the honor of meeting. -

What keeps you going to Rocky every weekend?
Um, I would say the people above everything else. Rocky is in it's own little world. I get to be the person that is brave and confident about being a big girl. I get to laugh, cry, and sometimes scream with people that mean the world to me. I have always said that you meet some of the best people at Rocky. You just have to give the "Weird" people a chance.

How has Rocky Horror affected your life?
Rocky gave me friends when I knew no one in Austin. It has given me some of the best friends in my life. I have grown up doing this and it is because of the people in this show that I am a better person and still on this planet.

Do you have a love/love or a love/hate relationship with Rocky?
Love/hate.

What do you do when you're not at Rocky?
I work at Chevron put in the middle of nowhere. Yet, I am extremely happy living out here with my wife and two cats. I am an old lady and tend to come back to Rocky from time to time for a crazy night.

Are you a pirate or a ninja? (butt pirates don't count)
I am a pirate, and will be until I die. Didn't you hear about what happened to me on September 25, 2007? Well it is a long story, but the short version is as follows. This damn Ninja cut my stomach open, and I had to have 28 staples and stitches to close the wound. You should have seen what I did to that damn Ninja.

What are a few of your favorite things?
My Wife; Slim Jims; Mountain Dew; Steak & Mushrooms; My kitties Po and Lexie, Boobies, etc.

What is your dream job?
I want to be a chef at Brittany's cupcake company Keep Austin Baked.

What's your favorite kind of pie?
Pumpkin and homemade apple!

Anything else random to share?
It's an A+, MAGICAL world with lots of GOOD GAMES 4 everyone! So, DON'T BE GAY, JUST TOUCH IT! Because after all THAT'S WHAT SHE SAID!