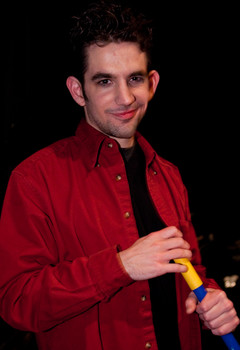 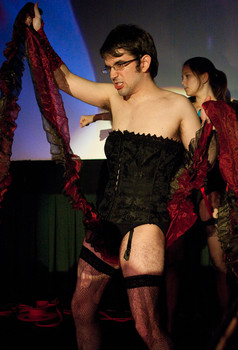 When did you first see Rocky Horror?
I first saw Rocky in January 2009

When did you join the cast?
Late January, after seeing the movie three times.

Why did you join the cast?
I really loved it, and I figured I might as well get in free (and maybe my girlfriend joining cast could have had a little something to do with it).

What do you do on cast?
I have done spotlight and I'm training on floor props.

Who's sexier, Columbia or Magenta?
Magenta: Accents are hot, even ridiculously fake accents.

What keeps you going to Rocky every weekend?
Frank. I'm holding hope for the night he *doesn't* get killed at the end.

How has Rocky Horror affected your life?
I've discovered that I look damn good in makeup.

Do you have a love/love or a love/hate relationship with Rocky?
Love/Hate - I love the movie he's in, but he's just so stupid...also, I'm jealous of his bod.

What do you think of Shock Treatment?
Haven't seen it.

What do you do when you're not at Rocky?
Myself

Are you a pirate or a ninja? (butt pirates don't count)
Ninja

Besides Rocky, what are your obsessions?
I don't obsess, it's too much work.

What is your dream job?
Cheesecake taster