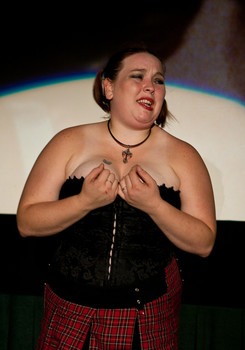 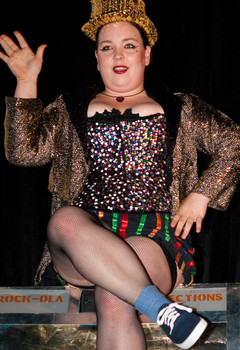 When did you first see Rocky Horror?
I first saw the movie with my best friend Lauren when I was like 12. She was obsessed with the lips on the cover of the box and convinced her parents to rent it for her. We watched it and she hated, loathed, and despised it, and I fell in love with it. She just rolled her eyes and went "ugh!" when she found out I joined cast. I miss her. First time I saw it with a cast was back in the Discount days when I was a Freshman in high school. Then, I never left.

When did you join the cast?
02/16/2001- I officially played for the first time because they had no one else to play Magenta that night and since I was friends with the cast, was dating a cast member, and had been to the show every week for like the past three years, they decided they could throw me in.

Why did you join the cast?
I still have no idea. I always admired the people on cast and the fact they had the confidence to do it, but I always said that I would never join. I guess I was just in the right place at the right time.

What do you do on cast?
Well, I haven't been to the show in over a year. It seems life keeps getting in the way. WOO HOO!! But, back in the day, I played every single part, but not at the same time. Due to my clumsiness and record with breaking things, I was not allowed on tech.

Who's sexier, Columbia or Magenta?
I know this is sacrelige, but I really don't think either is very attractive. I mean, Little Nell in Shock Treatment was hot, but that's about as close as it gets for me.

What keeps you going to Rocky every weekend?
I don't get to go very often these days at all. I'm lucky enough to be a Mommy, which makes it hard to go most of the time.

How has Rocky Horror affected your life?
I have spent the best and worst times of my life with the ever changing cast. I discovered myself at Rocky, met some amazing people, and the father of my child.

Do you have a love/love or a love/hate relationship with Rocky?
I don't know how to answer. I love it for what it brought to my life, and the memories I've made, but if I never have to sit down and watch it from begining to end, it'll be too soon.

What do you think of Shock Treatment?
I absolutely hated it until we went to the Rocky Con in Witchita and I saw the live cast perform it. Now, I love it! Of course, I love the Witchita Con in pretty much every aspect.

What do you do when you're not at Rocky?
Work, play video games, hang out at home, play Betty Crocker, watch TV, and by TV I mean The Simpsons and reality TV galore! I am a really boring person...

Are you a pirate or a ninja? (butt pirates don't count)
Totally a NINJA!!! Although Shayne's nursery is decked out in pirate stuff.

Besides Rocky, what are your obsessions?
My munchkin Shayne, Kev, cooking and baking, and reality t.v.

What is your dream job?
I am pretty much living my dream! I am a stay at home Mommy and I'm in the middle of trying to open up a bakery with my Mom. It's freaking awesome!

What's your favorite kind of pie?
I make a slammin' Pina Colada Pie.

Anything else random to share?
I am terrified of frogs and squirrels.