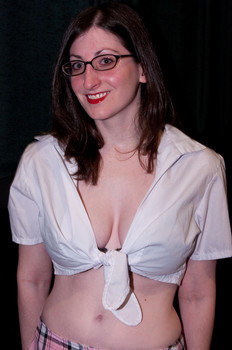 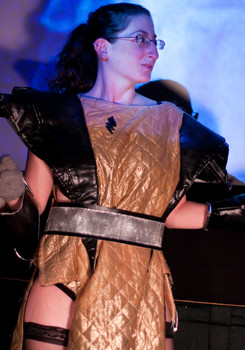 When did you first see Rocky Horror?
oh god....long ago. I think I first watched it by myself before I went to the Rocky Horror Show on Broadway with my friends. I didn't really get the movie so I was a little worried about seeing the show. Turns out I loved it!

When did you join the cast?
I first joined a cast when I went to college in Cleveland. I was working at a movie theater where Voyeuristic Intentions was performing and decided to go to the auditions. That was in October 2003 and I played Columbia with them until 2007. I am not sure exactly when I joined Queerios. I think it might have been the first week of September, 2008.

Why did you join the cast?
I loved the movie theater that I was working in and a lot of them were members of the VI cast. When I came to Austin I was looking for a way to make meet new people- Rocky seemed like the way to go.

What do you do on cast?
I played Columbia for Cleveland's Voyeuristic Intentions for five years. Now that I am a member of Queerios I play Magenta, Crim, Janet, Dr. Scott, and Trixie

What keeps you going to Rocky every weekend?
The people and the chance to yell loudly at the screen.

Anything else random to share?
I am a huge nerd. I know more about Star Wars, LOTR, HP, etc. than you know about yourself. I love XKCD, improveverywhere, bad puns, and games like settlers and citadel. I am always looking for more nerds to hang with!