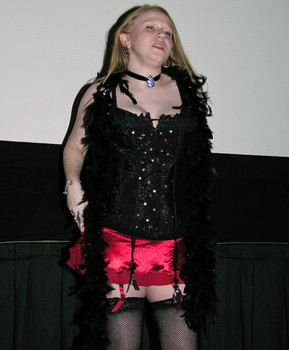 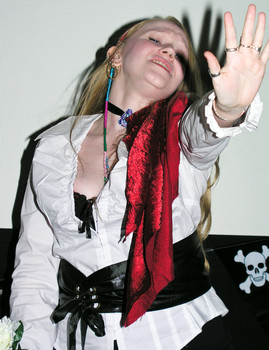 When did you first see Rocky Horror?
I first saw it when I was about 12 or 13... Shawn just happened to be playing Frank and I was scarred for life.

When did you join the cast?
I don't think I ever really did, I just kind of wander in and out... The first time I played was when I was about 14. I got thrown in to play Trixie at the last minute cause the person who was supposed to be doing it backed out. The first time I officially played was around 2001 after I left the now defunct San Antonio Rocky cast, Satanic Mechanics.

Why did you join the cast?
Boredom?

What do you do on cast?
I used to play Janet... But now all I ever do is Trixie cause im lazy like that. Now I am content to play for 2 minutes and then sit down, watch the show, drink a Dos XX and eat some chips and queso.

Who's sexier, Columbia or Magenta?
It's a toss up for me, they are both sexy but in very different ways. Magenta is textbook sexy... Columbia is sexy in her own cute little girl kind of way.

What keeps you going to Rocky every weekend?
Apparently nothing does cause im not there every weekend! I live in SA and I am not devoted/crazy enough to drive there every single weekend like Shawn used to.

How has Rocky Horror affected your life?
It has given me a closer relationship with my brother, helped me gain confidence, and has given me some pretty cool friends.

What do you think of Shock Treatment?
I love love love it! In my opinion it is Rocky's superior younger sibling. The soundtrack is awesome and the plot is thought provoking. Very ahead of its time.

What do you do when you're not at Rocky?
Work, more work, oh and work. I work as a Medical Assistant at the NIX hospital in downtown SA where I am a slave to my doctors. I also enjoy painting and drawing, the main subject of choice being naked/half naked women. A lot of my time at home is spent with my animals cause they can never get enough attention. Oh and I also play WoW on occasion, which is a step forward for me because I used to play that stupid game 24/7.

Are you a pirate or a ninja? (butt pirates don't count)
Im a kind of ninja-pirate hybrid that likes glitter and Hello Kitty.

Besides Rocky, what are your obsessions?
Animals, Art, the Medical Field, WoW, The Neverending Story, and last but not least Reality TV shows

What is your dream job?
I have many: RN, Doctor (preferably a surgeron of some sort), Psychiatrist, Vet

What's your favorite kind of pie?
I am more of a cake kind of girl myself but if I had to choose I would say Pecan

Anything else random to share?
No I would say that these questions were random enough..