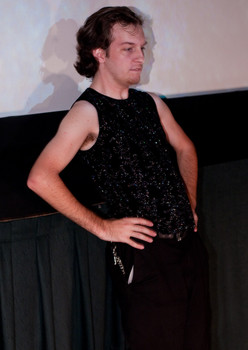 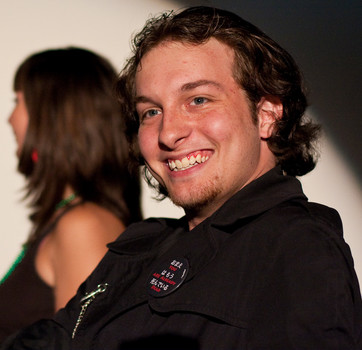 When did you first see Rocky Horror?
Sometime my Sophomore year in High School. A friend lent me the DVD.

When did you join the cast?
After the 32nd anniversary show.

Why did you join the cast?
Because I wanted to!

What do you do on cast?
Well, sometimes the cast needs something tech to be done. But not just one thing, a couple of things. Maybe more. At the same time. And I am just man (or crazy) enough to get it all done! When it comes to appearances on stage, I have done a Ninja Crim (for the Pirate show), Transie, Dr. Scott, Regular Crim, Eddie, and do a damn good Riff-Raff if I do say so myself!

What keeps you going to Rocky every weekend?
Boobies. That and a somewhat weird sense of humor. Also, I am still trying to find Fluffy, my black cat. EDIT: Alright, I found him. ...sick bastards.

How has Rocky Horror affected your life?
I now crossdress once a week.

Do you have a love/love or a love/hate relationship with Rocky?
I will answer your question with a SAT analogy: The relationship between Me and Rocky, is like Pie and... A) Salt B) XBOX 360 C) Religion D) Massachusetts See if YOU can make sense of it.

Are you a pirate or a ninja? (butt pirates don't count)
Ninja. Just look at my username!

Besides Rocky, what are your obsessions?
Anime, Card Games, Video Games, creating games of all kinds, Cosplaying, making jewlery, and sitting around with my friends cracking stupid jokes.

What is your dream job?
Own a Card/Board Game company [makes and distributes card and board games]. And, if I don't die of either exhaustion or a mental breakdown, I'll have a tabletop RPG system ready to go for A-Kon!