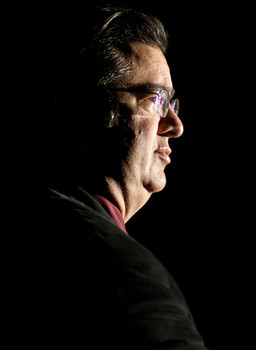 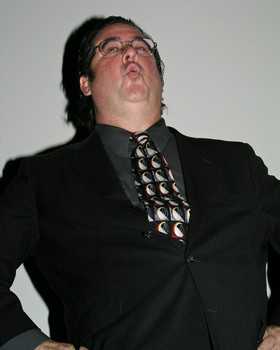 When did you first see Rocky Horror?
...sometime in the mid 80s after my ex had moved out. I knew some of the regular audience members and cast members from a local dial-up BBS. I sat next to regulars and struck up many friendships.

When did you join the cast?
Sometime in the late 90s

Why did you join the cast?
I love showing off (Acting!), but mainly at first it was to save money. I was out of work and liked going and could not afford driving there and buying a ticket.

What do you do on cast?
Anything they will let me? Usually Crim or Dr Scott. I played Magenta on a Rookie Horror Beach Night, played Brad only once so far, did a Trixie that caused brain damage (with maroon bikini briefs, sunglasses, and big cigar). It is an honor to be allowed to share the stage with so many talented people that I sometimes have to pinch myself; other times I just stroke myself (or at least I used to).

Who's sexier, Columbia or Magenta?
I could say Magenta because she rocks, but Columbia shows her nipples and is human, and I like women like that.

What keeps you going to Rocky every weekend?
For midnights on a Saturday, it is usually the best show in town. It is like a family -- dysfunctional, sure, but at least we are aware of it. I have friends, and I can get hugs, and young people do not mistreat me. Also I get to yell obscenities, which is cathartic.

Do you have a love/love or a love/hate relationship with Rocky?
I used to, but mental slippage and aging have made it increasingly difficult to cling to anything.

What do you do when you're not at Rocky?
I often hang out at the Alamo Drafthouse(s) in hopes of not contracting some disease.

Besides Rocky, what are your obsessions?
Music, beauty, various arts, inquiries of other matters

Anything else random to share?
When I stop at an intersection while it is raining, I turn off the wipers so that I can watch (and listen to) the rain hitting the windshield.