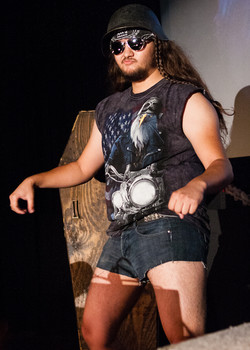 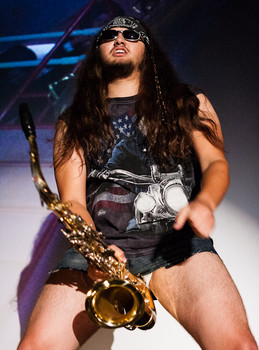 When did you first see Rocky Horror?
Hmmmm, March 2011. My dad said I had to see it at the Alamo Drafthouse before anywhere else. So I went. Been goin regularly ever since! This shit is addictive man. Gotta get my fix!

Why did you join the cast?
Well I always need something to do late night, what better than goin to see the same movie over.... And over..... And over again?!

What do you do on cast?
I am Dr. Scott, Eddie, Crim and various tech

Who's sexier, Columbia or Magenta?
Everybody says Magenta. But I dunno. I find Columbia a little sexier. Just put some duct tape over that annoying big mouth of hers and all is good!

What keeps you going to Rocky every weekend?
My love for the movie, the people, and of course THE VIRGINS. It's the best. Plus all the sex.

How has Rocky Horror affected your life?
I've never seen anything like it and I actually have plans every Saturday night rather than sitting on my ass on Facebook!

Do you have a love/love or a love/hate relationship with Rocky?
Love/love. You can't hate people being allowed to run around in their underwear and scream in a movie theater!

What do you think of Shock Treatment?
Never seen it. Heard some of the music, it's not bad.

What do you do when you're not at Rocky?
Sex, play guitar, sex, video games, sex, school, sex, work at Subway, sex, shop for guitars on eBay, sexxx

Are you a pirate or a ninja? (butt pirates don't count)
Pirate all the way motha fucka!

Besides Rocky, what are your obsessions?
Sex. Making men with blonde hair and tans. Guitars!

What is your dream job?
Musician in a heavy fucking metal band. Or glam band. One of the two are fitting for me.

Anything else random to share?
No! Now go away or I shall taunt you a second time!