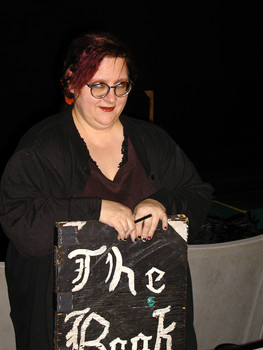 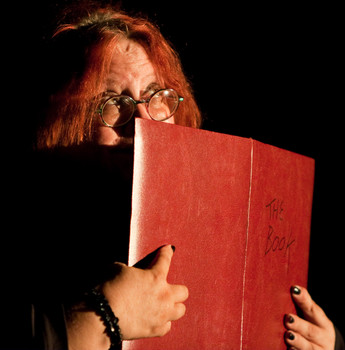 When did you first see Rocky Horror?
March 13, 1977, at the Mann National Twin theater in Corpus Christi.

Why did you join the cast?
I was in the Corpus cast before moving to Austin... a lot of great people and some are still my good friends, but we could never get past a certain level because of awful management, difficulty keeping cast members, etc. I just fell for the Austin cast and had to be a part of it. And Rocky just had to be part of my life.

What do you do on cast?
I'm not much into performing anymore (here, I have played Magenta, Crim, and Dr. Scott--in Corpus, I did Magenta, Janet, and Frank). I was cast director enough times to make me more insane, also special shows a few times. Now I enjoy the show, take lots of photos, and give people tylenol and safety pins as needed.

Who's sexier, Columbia or Magenta?
Magenta - and I agree with Shawn about any woman looking better in a Magenta dress... (maybe some men too)

What keeps you going to Rocky every weekend?
Because i love it, have so much fun, and it's a part of me now.

How has Rocky Horror affected your life?
All to the good... I have so many close, wonderful friends I met at Rocky, some of whom I've known since the 70's/80's. I met and married James Laljer at the show, I met Davina, my adopted daughter, there, I've had so much enjoyment out of my years at Rocky and some cool adventures roadtripping. Rocky is just something that makes me happy.

Do you have a love/love or a love/hate relationship with Rocky?
Love/love. Sometimes when there's too much self-indulgent drama I get exasperated (when people get big-headed and think it's all about them, or fight viciously over stupid trivia and hurt each other) but this cast is pretty good about that stuff lately.

What do you think of Shock Treatment?
When I first saw it I felt pretty disoriented, but it grew on me. I really love the songs (though I love some from "The Stripper" even more). I was thrilled to get to see it on a big screen with a cast at 2 cons.

What do you do when you're not at Rocky?
Pack and try to get stuff in order... I'm selling the house I grew up in, the city is buying out the neighborhood I live in now due to recurrent flooding, and we are about to build a home in the boonies. Sometimes I go to work with James and bump around in his truck all over central Texas. My friend Trey and I have monster movie days and watch (usually bad) ones all day long. My critters keep me company when I'm being reclusive. I also spend a lot of time at Austin public access tv and the Vortex theater.

Are you a pirate or a ninja? (butt pirates don't count)
I suck at swordplay so I would be a dead either one. I would probably have been happy being Anne Bonney and Mary Read's cabin wench though. Pirates accessorize better than ninjas, imo.

Besides Rocky, what are your obsessions?
Movies, especially horror, books (all genres, except straight romance novels), cryptozoology, my menagerie, writing, making collages, keeping scrapbooks full of photos, cut-and-paste commentary, newspaper clippings, and weird little souveniers (they are kind of my visual diary of life).

What are a few of your favorite things?
The movies, books, my critters, plastic toy monsters and Hallooween decorations, the colors black and green, and writing (when you see me writing in some notebook, it's my version of playing Sims...)

What is your dream job?
Owning a used bookstore.

What's your favorite kind of pie?
Key lime, and the Bayou Goo from the House of Pies in Houston. And the vegan chocolate/banana/avaocado from the Yin-Yang Fandango in Corpus!