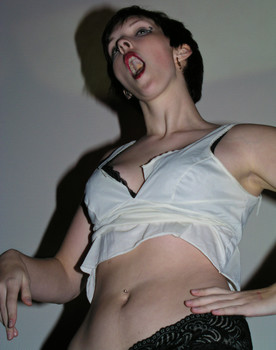 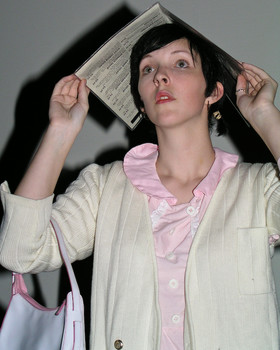 When did you first see Rocky Horror?
Hmmm... sometime between my freshman and sophomore years of high school?

When did you join the cast?
I want to say October/November 2004.

Why did you join the cast?
I had wanted to join since my friend Jenn dragged me to see it at the Discount in high school, but couldn't since mainly I didn't have a car and it was so far north from where I lived. I was pretty happy when it started playing at The Village. I'm a theater junkie. The people that I met from the cast that night were cool. I was on shrooms and thought it would be a funny idea. All of the above? Some of the above? Take your pick.

What do you do on cast?
Sometimes I play parts. Usually I control the floor lights and have my own little light show. If only I had a smoke machine and some lasers...

Who's sexier, Columbia or Magenta?
I like them both. I like ogling Patricia Quinn a lot, and I love Little Nell's energy. Sexier, though... have to go with Magenta.

What keeps you going to Rocky every weekend?
Who doesn't like catchy tunes and fun times? The half naked part doesn't hurt, either.

How has Rocky Horror affected your life?
It's a great place to fly your freak flag, make new friends, and let off steam. I think it helped me at least crack open my crazy shy little shell.

Do you have a love/love or a love/hate relationship with Rocky?
Love/love? I'm pretty neutral about it really.

What do you think of Shock Treatment?
I liked it. No, I'm not kidding. Although I haven't seen it in a few years so I might have to go back and check.

What do you do when you're not at Rocky?
Hang out at various coffee shops for coffee and/or crosswords, play WoW and assorted video games, have board game nights, shoot pool at my local dive bar. Whatever fun stuff comes my way.

Besides Rocky, what are your obsessions?
Arts and crafts, reading (my biggest obsession), all kinds of music, my pets, certain musicals, making faces, making lists of things, inside jokes, words.

What are a few of your favorite things?
Not the movie you're referring to, or maybe just made me think of. Check above!

What is your dream job?
Book editor, ecologist, English professor... I feel like I'm doomed to be a librarian.

What's your favorite kind of pie?
As long as there will be punch, I'm good.