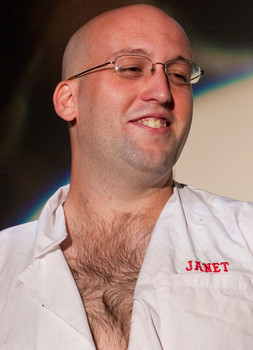 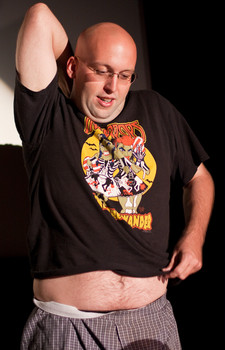 When did you first see Rocky Horror?
Mmmmm boot leg VHS before the invention of DVDs

When did you join the cast?
Back in 95 or 96. I took Draven to the show and he dragged me down to join

Why did you join the cast?
I blame hormones and drugs

What do you do on cast?
Annoy people? I've played Brad, Riff, Scott, Eddie and Crim, and even nearly run the cast into the ground. Recently I've been declared Prime Dictator of Garter Belts. Gods have mercy on us all.

Who's sexier, Columbia or Magenta?
Columbia, it's the voice

What keeps you going to Rocky every weekend?
The family story is that I was dropped on my head as a child. Actually the people are great and it's liberating to have a place where I can be a freak and not get booted from the theatre.

How has Rocky Horror affected your life?
I know more about lingerie than I probably should. But I still haven't figured out how to put on god damn eyeshadow. I look damn good in a corset and I'm not near as shy.

Do you have a love/love or a love/hate relationship with Rocky?
I love it. I'm really not well. Where else can you see hot people in skimpy clothing and not have to worry about what they stripper just dripped on you?

What do you think of Shock Treatment?
I like the songs

What do you do when you're not at Rocky?
I play WoW, sing (badly) in an A Capella group, Dress in women's clothing, Smoke too much, Meditate, Pun viciously, Break Computers, Fix Computers, Use Unnecessary Capitalization and enjoy a good movie on occation.

Besides Rocky, what are your obsessions?
Computers, Random Musicals, All things Goth, Shoes and shoelaces that blind others.

What are a few of your favorite things?
Raindrops on roses and whiskers on kittens Bright copper kettles and warm woolen mittens Brown paper packages tied up with strings Cream colored ponies and crisp apple streudels Doorbells and sleigh bells and schnitzel with noodles Wild geese that fly with the moon on their wings Girls in white dresses with blue satin sashes Snowflakes that stay on my nose and eyelashes Silver white winters that melt into springs These are a few of my favorite things

Anything else random to share?
I should never again shave my beard. Also Shawn should let us use break tags on our bios.