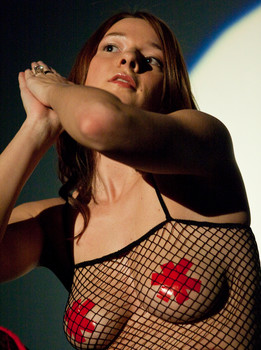 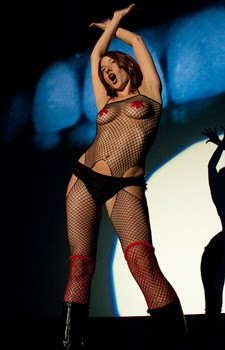 When did you first see Rocky Horror?
very young, maybe 5 or 6

Why did you join the cast?
a live performance predicated on shadowing, loose and fast, with attitude, skin, and foul language...? c'mon, it sells itself

What do you do on cast?
some tech, Rocky, mostly Trixie and going to train for Janet, then on up to Columbia and Magenta when the timing's right

Who's sexier, Columbia or Magenta?
magenta; sultry and insane

What keeps you going to Rocky every weekend?
as long as people don't bring anxieties, stresses, bitterness and sadnesses into the theater, the show will never let you down on being exciting and funny every time

Do you have a love/love or a love/hate relationship with Rocky?
love/love. you'll catch me enamored with the screen between performing. in ways i can't find the words to explain, the feelings the film gives me are....religious

What do you think of Shock Treatment?
haven't found the time to see it yet

What do you do when you're not at Rocky?
full-time school, full-time work, dancing with hula hoops (plain, LED, or fire), catering to my pets, playing around with friends, driving like mr. toad, alamo events, concerts, etc. and rarely sleeping. :( i am ALWAYS doing 5 things at once, i am the definition of role conflict

What is your dream job?
translator