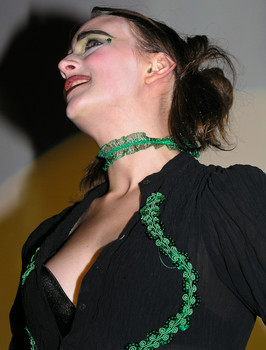 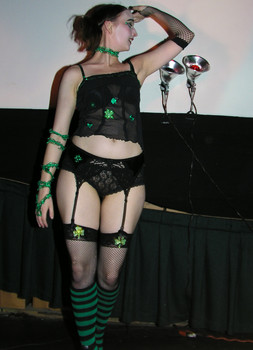 When did you first see Rocky Horror?
A long, long time ago on a continent far, far away...

When did you join the cast?
Ummm...well, I joined Los Bastardos in June of '03. I think my first Queer Bastards Show was in Jan. or Feb. of the following year. However, I didn't start playing with the Queerios on a semi-regular basis until '05 or '06.

Why did you join the cast?
I didn't so much join as got assimilated by default! You come down for a Queer Bastard show, next thing you know, you're coming down for random occasions like Birthdays & Weddings and just so happen to get cast...and wham! Apparently, you're a Queerio.

What do you do on cast?
Janet mostly. I recently started playing Columbia for LB so you might be able to catch me as Columbia in future Queerios shows. I've played Frank once for each cast and Brad several times for LB.

Who's sexier, Columbia or Magenta?
Magenta! Oddly enough, I have yet to play Maggie, but that works out well 'cause it means I get to rub on her as other characters =)

What keeps you going to Rocky every weekend?
The people. They're like family, but hotter.

Do you have a love/love or a love/hate relationship with Rocky?
The character or the show? Love/hate with the character. He's dumb, but lovable. Kinda hot but kinda not. The show is more of a love/love/hate/love/love thing. There are some nights that I just wish I could have the night off...but when I do have the night off, I end up at the show anyway so I'm pretty much a lost cause. I mean, really...I go out of town AWAY from cast, and end up playing with another cast. So often, in fact, that I now have a cast bio on their site. Yeah. I'm a rocky whore.

What do you think of Shock Treatment?
I didn't know what to think at first. It's nothing like Rocky Horror and I love it in a completely different way.

What do you do when you're not at Rocky?
I'm a College Student, waiting tables to make ends meet. I enjoy food.

Are you a pirate or a ninja? (butt pirates don't count)
Pirate all the way. I'm on LB. We're the Pirate cast...don't listen to NY.

Besides Rocky, what are your obsessions?
Blue Man Group, food.

What is your dream job?
Stage Manager for the Blue Muppet Group.