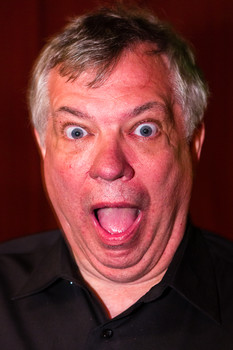 When did you first see Rocky Horror?
Halloween Night, 1975, San Antonio, Texas. You may draw your own conclusions. RHPS hit so hard that my roommate and I immediately got a soundtrack (reel to reel tape for crying out loud), and printed a booklet with the lyrics and prop list - put a hot pink cover on it and took copies to the show!

When did you join the cast?
October 13, 2012 - after a 17 year break in attending - have been in five different casts before - none of them were organized enough to have names.

Why did you join the cast?
The blackness - it hit me, and the void - it was calling...

What do you do on cast?
Tech so far, which is good! The other five casts I was part of didn't have anything beyond props... Almost exclusively Crim and Dr. Scott (for the obvious reasons) even before I got gray hair. Riff might be fun to do!

Who's sexier, Columbia or Magenta?
Magenter...(wink), but Columbia dances better!

What keeps you going to Rocky every weekend?
Same as everyone else!

How has Rocky Horror affected your life?
Hmmm. Gotta think about that one.

Are you a pirate or a ninja? (butt pirates don't count)
A pirate ... more accurately an airship pirate.

Besides Rocky, what are your obsessions?
Too many to list.