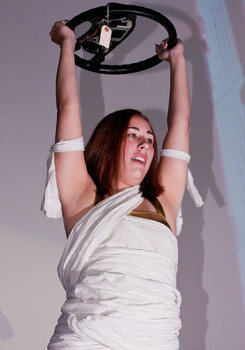 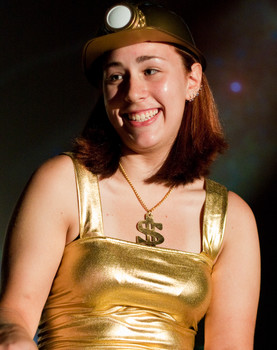 When did you first see Rocky Horror?
Sometime in 2006

Why did you join the cast?
I wanted to act like a tard every weekend....and I am an attention whore. :]

What do you do on cast?
Some Tech stuff. Have also played Frank, Janet, Brad, Colombia, Maggie, Dr. Scott, and Rocky either with Queerios or with Los Bastardos. I mostly play Brad or Janet though.

Who's sexier, Columbia or Magenta?
Maggie. I'm all over the French Maid look.

What keeps you going to Rocky every weekend?
All of my friends are there and It's the one night a week I can relax and say or do whatever I want.

How has Rocky Horror affected your life?
Holy Crap I would not have the best friends in the world if I hadn't started going to Rocky.

Do you have a love/love or a love/hate relationship with Rocky?
Love/Love. I still laugh when Dr. Scott does his little dance during Eddies Teddy. :]

What do you think of Shock Treatment?
Not my thing. The music is good but some how it had less plot than Rocky does. I honestly have no idea what happened during that movie other than Janet had a manly voice and crimmie was in it.

What do you do when you're not at Rocky?
Work. And then work some more. Then I play Mario. And then I go back to work.

Are you a pirate or a ninja? (butt pirates don't count)
Pirate. Im to loud to be a ninja.

Besides Rocky, what are your obsessions?
Movies, Books, Tattoos, and Joss Whedon.

What are a few of your favorite things?
Movies, books.... I think this was covered in the last question....

What is your dream job?
Assistant to Nathan Fillion or Joss Whedons Slave.

What's your favorite kind of pie?
Pecan. Or chocolate reeses.