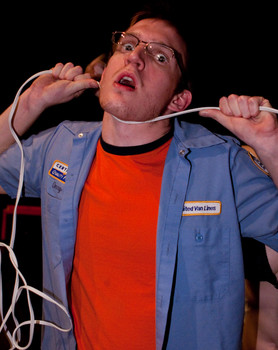 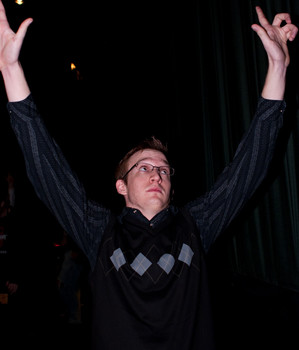 When did you first see Rocky Horror?
The movie itself? Late highschool, although I can't say I remember all the nipples and sex. I primarily remember men dressing up in women's clothing. The staged musical? Freshman year of college. My great friend played Magenta. The Picture Show w/ cast? The Last Show of 2008!

When did you join the cast?
The week after that!

Why did you join the cast?
It looked like a blast, having fun every weekend with a bunch of sexy and terribly funny people.

What do you do on cast?
I have played Frank, Riff, Maggie, Brad, Crim and Transie.

Who's sexier, Columbia or Magenta?
They both have awful voices but Columbia shows her nipples, which is always fantastic in my book.

What keeps you going to Rocky every weekend?
I am a year in including the show that I saw before joining the cast and there are so many jokes that STILL legitimately crack my ass up. Cool people also.

How has Rocky Horror affected your life?
It certainly has muddled the lines of my sexuality, at the very least.

Do you have a love/love or a love/hate relationship with Rocky?
Right now, love/love. I listen to the revival soundtrack in my car ALL the time and scream lines when they come up. There is a reason I do not drive with my windows down.

What do you do when you're not at Rocky?
I work at Borders on South Lamar and go to school at Texas State.

Are you a pirate or a ninja? (butt pirates don't count)
I would say pirate because they use pistols and I think cutlass' are more bad ass than katanas.

Besides Rocky, what are your obsessions?
Musicals in general, Chrono Trigger on my DS and slashfilm.com NETFLIX on XBOX 360!

What are a few of your favorite things?
"In The Heights" Food "Company" Snuggling

What is your dream job?
My dream job is to work in film. I am not sure what I am meant to do once I get there, but I know I am going to have a long career in film or television one way or another.

What's your favorite kind of pie?
Pecan Pie. But the shitty kind of pecan pie that is like 95% jellied sugar with a thin layer of pecans on top.