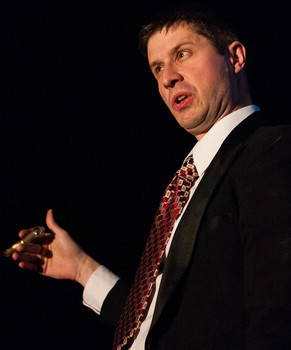 When did you first see Rocky Horror?
Back in college, early 90s. We threw croutons, I was auctioned off during the virgin sacrifice in the pre-show, it was the best of times, it was... yeah, pretty much the best of times.

When did you join the cast?
December 2010

Why did you join the cast?
Vicky infected me with her enthusiasm (among other things)

What do you do on cast?
tech (now, and mostly) and Brad (upcoming, Rookie Horror night)

Who's sexier, Columbia or Magenta?
Well, they're more than the sum of their parts together, but if I must choose... Columbia. Sorry, Magenta, you're hot and all, but I just know down the road it's gonna be all "Put this banana on your head and touch my elbow" and that just doesn't do it for me.

What keeps you going to Rocky every weekend?
The squeals of delight from the audience.

Do you have a love/love or a love/hate relationship with Rocky?
love/love

What do you think of Shock Treatment?
My dvd player stopped in utter disbelief at several points; I have yet to see the end.

Are you a pirate or a ninja? (butt pirates don't count)
yarrrr

What are a few of your favorite things?
It's cliche, but brown paper packages really get me cranked up. 'Specially tied up with string... hawt.