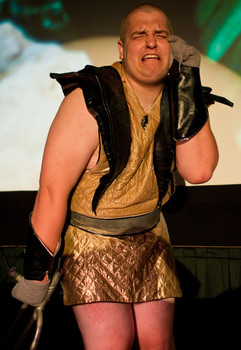 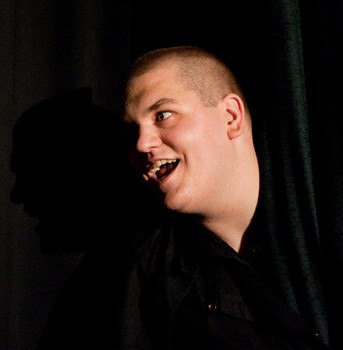 When did you first see Rocky Horror?
My freshman year of college. I was chilling out in the dorm lounge with some other people when this girl from the North wing who I had a class or two with started bringing out these paper bags filled with random shit (toast, rice, party hats, etc) and she was like "let's watch Rocky Horror!" A couple of people responded enthusiastically, but I think I was the only one out of the other five virgins that stuck around after the wedding scene. It was certainly a trip, and of course my brain immediately tried to wrap itself around Rocky and digest it. However, Rocky is simply too weird and fabulous to be wholly understood and that's what kept my interest--it was the mental equivalent of washing your mouth out with Listerine; no nourishment, but it tastes good and you're refreshed and cleansed, which was a switch from slogging through freshman lecture courses, which is like downing some stank-ass health smoothie if we're going to continue the "liquids you put in your mouth" analogy.

Why did you join the cast?
My girlfriend Kerry wanted to and I thought it would be one of those things that brings couples closer together, which it definitely has. Plus I like being involved with theater and hadn't had an opportunity to do so since high school.

What do you do on cast?
Floor tech, Eddie, and Riff thus far.

Who's sexier, Columbia or Magenta?
Hard to say... Magenta, simply because she's got that sultry accent thing going for her while Columbia's piercing Brooklyn shriek can probably kill a dolphin.

What keeps you going to Rocky every weekend?
Kerry, the fact that the cast is awesome and I love being a part of it, and the desire to be involved with such a goddamn fun show.

How has Rocky Horror affected your life?
It's injected a healthy dose of the surreal into my everyday, which I used to have but it got lost somewhere between high school and college (growing up sucks). Plus it's brought me closer to Kerry, not to mention making me more... comfortable. Just in general. I'm not as bound by societal norms... free to be weird. Especially after Lingerie Night--I will never feel uncomfortable with a lack of clothing again.

Do you have a love/love or a love/hate relationship with Rocky?
Love/hate; I love Rocky for all those awesome things listed above, but I hate it because it (like all theatrical productions) can sometimes be very stressful--no matter what you're doing you can screw up with a hundred or more people watching.

What do you think of Shock Treatment?
Never seen it, so I can't judge.

What do you do when you're not at Rocky?
Game. Sleep. School. Game. Love on Kerry. Love on Kerry some more. Love on Kerry whilst gaming. Eat heartily. Martial artistry. Work on the Master Plan. Refine Zombie Emergency Plan. Stockpile canned goods and weapons.

Are you a pirate or a ninja? (butt pirates don't count)
Ninja. And not the shitty mass-production versions that get slaughtered en masse in older kung-fu films, but the awesome kind.

What is your dream job?
Zombie hunter.

What's your favorite kind of pie?
Toss-up between pot, buttermilk, and coconut cream.