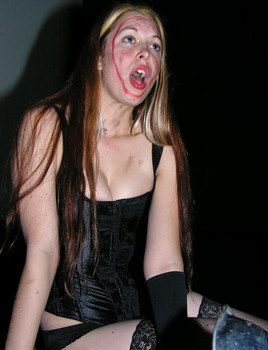 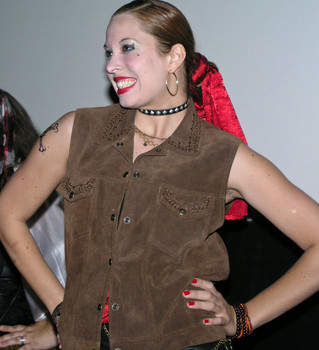 When did you first see Rocky Horror?
I grew up a fairly sheltered little thing... While I'd enjoyed a very loud albeit one-sided love affair with Tim Curry from the time I was only knee high to a Transie, no one had ever tipped me off that he'd once strutted his sexy self around a set in drag. No, I was completely in the dark. Eventually when I was 14 or 15, RHPS aired on basic cable (my parents kept most everything else blocked) and I caught about half of it. Wow. Really, though... Wow. Ain't life swell? Life under my rock was suddenly a little bit better.

Why did you join the cast?
I'd been painfully shy for.... forever. It felt like the right time to stir things up, I guess.

What do you do on cast?
Admire breasteseseses. Oh, and play Janet. Sometimes Columbia. Occasionally Brad. A couple times as Eddie. That one time as Rocky. But mostly, I admire the breasteseseses.

Who's sexier, Columbia or Magenta?
Magenta's down with the kink.

What keeps you going to Rocky every weekend?
Richard O'Brien's music and Tim's legs.

What do you think of Shock Treatment?
It's bitchin' in the kitchen.

What do you do when you're not at Rocky?
Collect souls. *cough* Or, rather, collect kitten pictures.

Are you a pirate or a ninja? (butt pirates don't count)
Arrrrrrrrrrrrrrrr. Ninjas can bite m' seafarin' arse, and then theys can take a spin on m' left peg leg.

Besides Rocky, what are your obsessions?
DunderMifflinInfinity.com