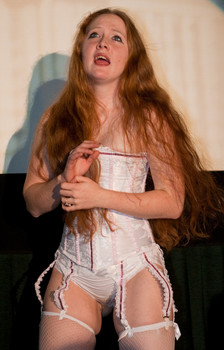 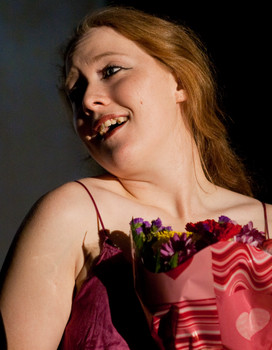 When did you first see Rocky Horror?
When I was thirteen, at the Discount cinema. I was in a summer youth theatre production at the Vortex, and one of my fellow cast members (one Tricia Storie) invited me to go. Little did I know the interesting direction that would take my life.

Why did you join the cast?
Because I wanted to be a part of the fun and wackiness.

What do you do on cast?
Janet, Occasional Dr.Scott, Trixie, Riff Raff,

Who's sexier, Columbia or Magenta?
Maggie, duh. BTW, my car is Magenta (like, the color) so her name is Maggie too. Oddly, my mother's car is named Ruby, my sister's car is named Bullet, and my uncle's truck we've always called "Ol' Blue", and NO, we do not always name our cars after their colors. My mom's deceased white van was called Senora Jalapeno Pepper because her license plate was SJP 56M.

What keeps you going to Rocky every weekend?
My old cast. I love them.

How has Rocky Horror affected your life?
I am decidedly weirder and have better friends because of it.

Do you have a love/love or a love/hate relationship with Rocky?
love/hate

What do you think of Shock Treatment?
*sigh* black dress.

What do you do when you're not at Rocky?
I used to be a food service specialist in the Coast Guard. Now I work at a ski resort restaurant in Vail, Colorado.

Are you a pirate or a ninja? (butt pirates don't count)
pirate. Chello? When was the last time you heard of a ninja with wenches? Plus, I used to live on a ship.... although I am a ginger, and Cartman says gingers can't be pirates because they don't have souls.. .. I'm so confused.

Besides Rocky, what are your obsessions?
Cooking, salsa dancing, reading,

What is your dream job?
getting paid exorbitant amounts of money to do as little as possible.

What's your favorite kind of pie?
MMMMMMMMmmmmm. Pie. I like pie. Hey weeble, let's go get some pie. Pecan....definitely Pecan.

Anything else random to share?
I'm a clone experiment gone horribly wrong. Ok, so I'm a twin. I like to call her my "private organ donor" Also: Men are like parking spaces: the good ones are taken, and the rest are all fucking handicapped. There, I said it!