Other Rocky Horror Casts In Texas 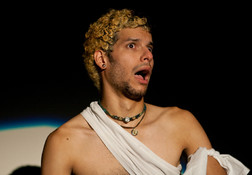 QUEERIOS is the performing cast of the Austin Rocky Horror Picture Show, presented at the Alamo Drafthouse Village theater EVERY SATURDAY AT MIDNIGHT. If you have not yet experienced Rocky Horror in a theater (VIRGIN!) and are wondering what to expect from this audience participation phenomenon, take a look at this guide for first timers. For more details about attending our show, please see the Theater Info page. Be sure to register at the discussion forums and chat with us also. We are ALWAYS looking for new cast members, so don't be shy. We'll see you at the show!

Tickets are on sale now for our Halloween weekend shows! Go here: http://drafthouse.com/movies/the_rocky_horror_picture_show/austin. The Alamo Drafthouse Village just finished up nearly two weeks of remodeling work, to provide a greatly expanded lobby area as well as a larger bar with more taps for beer. Apparently you'll finally be able to actually wait in line for movies inside the lobby, and not outside in the cold...:-) Grab tickets while you can. And wear a costume!

Also our recent road show at Texas State University was very well received, with an audience of 150ish students. There's a writeup about us in their school newspaper as well as an awesome video with performance footage and interviews. I've also posted some limited photos from the show (limited because I was also playing Riff Raff!). Everyone had a blast. With any luck they'll make this an annual event.

Halloween is coming up quickly! Take a look at this thread for our full schedule of shows in October, including Halloween night as well as a road show in San Marcos. Also I know that it's been awhile since I posted very many cast photos, but they've started going up again lately. Here are a few photo galleries that have been posted from the past couple months: October 8th, September 24th, and August 20th. Enjoy!

The Queerios have been requested to perform during a showing of The Rocky Horror Picture Show at the LBJ Student Center amphitheater of Texas State University in San Marcos on Thursday, October 20th at 8:00pm. This looks like a great outdoor venue, and should be a whole lot of fun during the run up to Halloween! There will be also be an audience costume contest.

The Queerios will be appearing again this year at GeekFest in Killeen on Friday, August 19th. This event is put on by Central Texas College and the Mayborn Planetarium. We were invited to attend last year and performed to a very excited sold out audience. We performed inside the planetarium itself with the movie projected on the dome, which was certainly a first for all of us! This year it looks like they'll be having two shows, with Queerios performing the earlier show and possibly some local volunteers performing in the later show (which we'll still be helping out with). Should be a whole lot of fun! More info is here: http://www.starsatnight.org/geekfest/.

The 35th Anniversary celebration continues this week with the "Rocky Horror Glee Show", broadcasting tonight. After listening to the CD released for it last week, the cast sounds great though there was some amusing sanitization of lyrics for network television (particularly in Touch-A). Dr. Frank-N-Furter is apparently a Sweet Transvestite from 'Sensational' Transylvania, and Janet seems to be inexplicably worried about 'heavy sweating' and 'bad fretting'. Gah! Fox was kind enough to send some promotional materials over to our theater this past week, so we were able to hand out a couple copies of that CD as well as t-shirts to every audience member with "I Did The Time Warp With Glee" on them. Pretty awesome!

Speaking of our audience, this past weekend's show sold out at 5pm on Saturday. Tickets are available online now for all three of this coming weekend's shows, so I highly recommend buying early. I do hate seeing large disappointed groups of dressed up people in the theatre parking lot. At any rate, also being released today is the Rocky Horror Picture Show Track Pack for Guitar Hero: Warriors of Rock. So after Glee is over tonight I'll assuredly be trying my hand at playing plastic bass on the three songs included in that ("Hot Patootie", "Sweet Transvestite", and "Time Warp"). How sweet it is...:-)