Other Rocky Horror Casts In Texas

The Rocky Horror Show is the stage musical on which The Rocky Horror Picture Show was based. The movie is a very direct adaptation of the play, a primary reason the movie lends itself so well to performing casts. RockyShows.net has a frequently updated list of current productions in the U.S. The initial run of The Rocky Horror Show was in London at The Theatre Upstairs, starting June 16th, 1973. Several of the original cast members from this production went on to reprise their roles in the movie, including Tim Curry as Dr. Frank-N-Furter, Richard O'Brien as Riff Raff, Patricia Quinn as Magenta, and Little Nell as Columbia. Jonathan Adams, who played the role of Narrator on stage, was Dr. Scott in the movie. 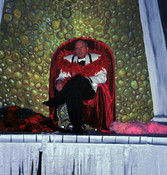